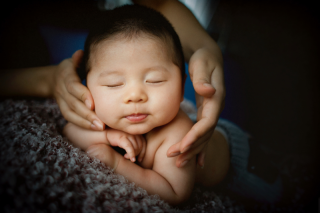 Photo by Chiến Phạm on Unsplash

It's the time of year when we honor and thank mothers for all they do. I think their most important job is literally wiring their babies' brains so that they can learn to love.

Strangely enough, while humans are born with the ability to breathe, digest food and wave our arms and legs, we don't come out of the womb with the neural wiring to form social connections. In the first three years of life, the brain goes through a huge growth spurt, and millions of brain cells connect with each other to form neural scripts—that is, habitual ways of reacting to events.

When a mother feeds her baby, cuddles her, cares for him, oxytocin is released in the baby's brain. Oxytocin is a calming brain chemical, so the combination of oxytocin and a mother's touch teaches the baby that intimacy is safe and feels good.

This forms a healthy, lifelong neural script: Someone who was nurtured well instinctively reaches out to other people for pleasure or consolation. And it's a positive feedback loop: Connecting with others makes us feel better, so we're more likely to do it again and again.

Human connection, driven by oxytocin, isn't only important for our emotional wellbeing. It's also key to good health and longevity.

By the way, when I say "mother," that doesn't have to be a woman or a biological parent; a baby's primary caregiver, if he or she is lucky enough to have one, fulfills this role. But since it's Mother's Day, I'll stick with "mother."

We commonly talk about all the roles a mother plays: nurturer, healer, teacher, chauffeur, cleaner, role model, etc. etc. But maybe her most powerful role is architect--architect of the human brain and its ability to enjoy one of the most resonant human experiences: love. 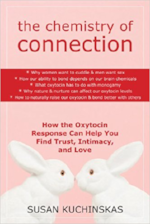 My book, The Chemistry of Connection explains how the oxytocin response develops and how it affects all our relationships throughout our lives. It's a great gift for mothers, mothers-to-be, and anyone else who wants to understand how and why we love.

My publisher, New Harbinger, has a special offer: Buy 3 books and receive 35% off + free shipping*

*Valid only in the continental United States. Not to be combined with any other offer.

Click here to buy my book and shop New Harbinger for deep discounts and free shipping.

In 2009, I published a post about a doctor who claimed to have successfully treated persistent genital arousal disorder, or PGAD, with oxytocin. Since then, I've heard from time to time from women who suffer from PGAD, also called PSAS, wanting information about potential treatment. Unfortunately, there has been little information and no resources.

PGAD is at the least uncomfortable and at worst, quite debilitating. When women with PGAD talk to healthcare professionals, they're sometimes dismissive. It's also shaming when people snicker.

There's evidence that persistent genital disorder syndrome can be triggered when someone stops taking antidepressants. And, going on antidepressants may help. According to CNN, treatment with the SSRI Tramadol helped one woman.

Electroconvulsive therapy (ECT) is certainly a last resort. It worked for one patient who also had developed bipolar disorder, according to a paper by Joanna B. Korda. In this case, the woman had bipolar disorder and stopped taking antidepressants without tapering off. She got temporary relief from ECT.

I also exchanged email with Lori A. Brotto, an assistant professor, an Associate Professor in the Department of Obstetrics and Gynaecology at the University of British Columbia. She works at the UBC Sexual Health Lab, where she treats persistent genital arousal disorder, as well as other women's sexual health conditions.

There is not a single treatment for PGAD, but some women will respond to oral medications like clonazepam, others to a TENS unit (and pelvic floor physiotherapy), and others to psychological strategies and anxiety reduction through mindfulness meditation.

The trickiest part in determining what treatment to pursue with a woman with PGAD is trying to determine, or at least narrow done, the cause for her. If it surfaced during a period of stress or anxiety, I would be more likely to adopt mindfulness meditation. If it arose with the start of or discontinuation of a (psychotropic) medication, then I'd try reversing that effect. If it is associated with restless legs or overactive bladder, I'd suggest a referral to a urogynaecologist to have that treated.

Marcel Waldinger, a Dutch researcher, found a link between PGAD and neuropathic changes in the nerves in the clitoris or surrounding areas. He's found that PGAD is often associated with restless leg syndrome and/or an overactive bladder. Therefore, he's renamed it Restless Genital Syndrome, or ReGS.

Finally, it looks like the Echenberg Institute for Pelvic and Sexual Pain in Bethlehem, Pa., is not only a good information resource but also a place that offers treatment that might be effective. Dr. Echenberg says on his website, that there is effective treatment for PGAD, which he considers a type of neuropathic pain. He writes,

PGAD is treated like other peripheral neuropathies and chronic pelvic pain disorders.  Find and treat all “triggers” which may be pudendal neuralgia, IC/PBS and others, treat the pain adequately and always find a qualified pelvic floor physical therapist for the inevitable pelvic floor dysfunction or clenching.

If your PGAD began around the time you stopped taking an antidepressant, it's worth considering asking your doctor to start you on a low dose of a different SSRI. On the other hand, if it began at the same time you started taking an SSRI, you might consider switching to a different one.

There are other treatments to explore here. It's possible that either the Echenberg Institute or the UBC Sexual Health Lab might offer referrals to someone near you. If not, keep looking for a sympathetic and adventurous gynecologist and/or psychiatrist.

The PSAS website has Dutch and English versions. It includes resources and links to forums where you can find support from other women.

It's so frustrating to not be able to find help, I know. The more women demand answers, the sooner medicine will find them.

A new study of prairie voles shows that they can not only tell when a member of their family has been hurt, they also show empathy.

Prairie voles mate for life and live in family groups (although they may have sex outside of the pair bond).

Larry Young (one of the original researchers who discovered oxytocin's role in animal bonding) and James Burkett of Emory University gave shocks to some voles in the family and then returned them. The other voles tried to soothe the ones that had been shocked by licking them.

I think it's pretty cool that this study showed that animals share some of humans' "higher emotions."

And, of course, research has identified the oxytocin system as a possible cause of or influence on autism for several years. Maybe this is a way scientists could study autism? The article quotes Larry Young:

"Many complex human traits have their roots in fundamental brain processes that are shared among many other species," Young said, according to the publication. "We now have the opportunity to explore in detail the neural mechanisms underlying empathetic responses in a laboratory rodent with clear implications for humans."

This morning, while I was lying in bed, our cat sat on my chest, purred and licked my face. It's a cute little quirk that I love about him. I know our cat loves me in his unique kitty way.

Oxytocin levels went up 12 percent in cats after they played with their owners. Oxytocin levels in dogs went up 57.2 percent. So, you could say that your dog loves you five times more than your cat. Hey, we know dogs are easy.

There is something I would add, based on my personal experience. Oxytocin levels go up during positive social interactions. It's a function of being comforted/comfortable. I would bet that cats' attachment to their owners is not as strong as dogs'. That is, the oxytocin response is more tightly connected to social memory in dogs than in cats. Just my personal theory.

Read the article in Bustle: http://www.bustle.com/articles/138786-dogs-love-their-owners-more-than-cats-do-but-that-probably-doesnt-surprise-you

Marijuana's happy effects could be due to oxytocin

Admission: I was a hippie (well, a semi-hippie). In the early 1970s I lived in my van, hitchhiked around and asked people on the street, "Do you have a place we can crash?"

I still clearly remember a time I was hitchhiking with a boyfriend. A guy picked us up and we smoked a joint. As we were riding along, this guy said, "Isn't this cool? We're sitting here together like we've been friends for years."

It was true. There was no feeling of nervousness, anxiety or constraint with this stranger.

I've often thought that marijuana, at its best, activated the oxytocin system. Here's research showing  that that is the case. A study by Daniele Piomelli, a neuroscientist at the University of California, Irvine, found that -- in mice -- " it is social interaction between mice plus oxytocin—the hormone involved in social bonding—that drive cannabinoid activity in the animals’ brains."

According to the article,

The finding may also point to a possible treatment for autism spectrum disorders, which can involve social-interaction difficulties. (The team initially homed in on the interaction of oxytocin and anandamide (an endocannabinoid) while studying autism mouse model of autism.)

I'm not sure this would necessarily work for people on the spectrum, nor for those who experience social anxiety. Although my experience in that car was very positive, marijuana more often than not makes me feel paranoid and more anxious around other people. There might be something different in my brain that inhibits the pleasant social effect.

Read the article in The Scientist here.