Alan kindly sent me a link to another story about banning hugs in school.

According to the Associated Press story, a 13-year-old girl got two days' detention for hugging one of her friends at school. Her middle school, in Mascoutah, Ill. has banned public displays of affection.

Yes, that means all displays and all kinds of affection.

This ban may be state-wide, because this incident follows another one in Oak Park, Ill.

Reading the comments to the news story bring out all the points of view and nuances of this issue. In a society which seems to have lost a common understanding of what's appropriate and what's not, we tend to default to forbidding wide swaths of behavior.

In this case, the ban on PDAs probably was  a response to kids engaging in serious make-out sessions (or whatever the kids call them these days). Leaving it to teachers' discretion on what goes too far would open the school to complaints about discrimination -- and possibly open the kids to discrimination from the teachers.

It's a sad state, but I don't blame this all on the school district.

Protect Me from Hugs 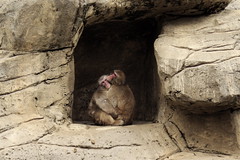 Hugs are natural and good; they remind our bodies that we have connections we can rely on. Hugging probably releases oxytocin. Come on, it's got to -- but scientists can't get grants to study hugs, it seems.

According to the article, administrators at the school banned hugging because "students [were] forming 'hug lines' that made them late for classes and crowded the hallways."

Evidently "hug lines" are not simple hugs between two people but rather a sort of conga line that can involve ten or more people at once, and this is what was clogging the hallways, according to another news report.

At first, I thought banning hugs was really sad. Okay, I still do. I can see banning hug lines inside the building -- wouldn't that have been enough? It's sad that our culture is becoming more and more touch-phobic.

If you read the comments on the first article, you get a fairly nuanced and broad range of perspectives on this ban, and, by extension, on touching, period. Some people think it's not really hugging, it's groping (touch-negative but probably somewhat accurate). Some people want their kids to focus on schoolwork and getting to class on time (goal-oriented but unrealistic -- school is as much about socialization as it is about learning). And some  bemoan the loss of our ability to reach out to others (I agree, but we're maybe a tad idealistic.)

At bottom, I think we have lost the ability to fine-tune human relationships; we're so all-or-nothing. Sexual abuse of children and unwanted touching by schoolmates is certainly a problem, so let's ban ALL touching, because no one can differentiate.

We NEED touch; we may need touch more than we need to be saved from it.

Bounty, maker of paper products for babies and grown-ups, ran a story today saying that cuddling your baby longer can reduce her crying.

No references are given, but a study supposedly found that babies who are cuddled, cooed over and generally offered bonding activities cry 50 percent less. But to make them this much happier, you have to coddle them for five hours a day. How many babies in the developed world get that, unless they co-sleep?

A lot of us are looking for ways to get more oxytocin in our lives; specifically, we want to be able to connect to people better. A new study found that the generic version of [a drug used by men] increases the amount of oxytocin released in the brain.

According to a story in WisBusiness, Meyer Jackson, a physiology professor at the the University of Wisconsin's Madison School of Medicine and Public Health, found that treating the pituitary glands of rats with [this drug used to treat a specific malfunction in specialized tissue] increased the amount of oxytocin they released -- but only in response to stimulation. The story says,

Oxytocin release is regulated by an enzyme that acts like a braking system, limiting hormone release by dampening neural excitation of the cells.  This same enzyme, phosphodiesterase type 5, also limits blood flow by contracting the muscles around blood vessels.

In both places, this drug works by blocking this enzyme, essentially releasing the brakes, explains Jackson.  In blood vessels, relaxing smooth muscle increases blood flow, which corrects [***] dysfunction, and in the posterior pituitary, the cells become more responsive.  "The same stimulation will produce more [oxytocin] release."

It's very important to note that oxytocin release wasn't increased across the board. {The drug] doesn't immediately cause an erection; it only increases the amount and duration of distension when there's sexual stimulation. Similarly, this effect in the brain only took place when the researchers tickled the neurons there with electricity.

The interesting question is, would [this drug]increase the bonding effect that takes place after sex?

Oxytocin plays a dual role in the body, traveling through the blood stream and acting on tissues as a hormone, while it's also released into the brain, where it seems to create social memory: the recognition of others as lovers and friends.

It's released into the brain after orgasm, and it's likely that this release is what causes sex and orgasm to bond us together. This would have been an adaptive advantage, because the bond would keep the man around to help protect and care for the baby that might result.

At the same time, oxytocin circulating throughout the body promotes rest, relaxation and healing. So, Viagra could increase the health benefits of oxytocin -- and of a great sexual romp.

If oxytocin is released in times of closeness and trust, hugging has got to be one of the best activities for getting and giving a nice oxytocin boost.

Newspapers articles are always saying that hugging releases oxytocin, and recommending at least 20 seconds. As far as I know, there's only been one study documenting this.

A 2005 study led by Karen Grewen tested women's blood levels for cortisol and oxytocin before and after 10 minutes of "warm contact" between a woman and her spouse or partner. They weren't exactly testing the effects of hugging itself, however. They wanted to see the relationship between the amount of support a woman perceived from her partner and her blood pressure, stress and relaxation hormones.

The women who in general felt more supported also had lower blood pressure and higher baseline levels of oxytocin. They did NOT find oxytocin increases after the hugs.

Nevertheless, some things you don't need a scientist to prove. I believe that other studies have shown hugging lowers blood pressure and improves health in general.

Here's the paper: <>a href="http://www.psychosomaticmedicine.org/cgi/content/abstract/67/4/531">Effects of Partner Support on Resting Oxytocin, Cortisol, Norepinephrine, and Blood Pressure Before and After Warm Partner Contact

See also: Free Hugs Part One and How I Cuddled

Posted at 05:44 AM in cuddle, everyday oxytocin, Oxytocin | Permalink | Comments (0)

Someone asked me about the provenance of the "Free Hugs" video I posted a while back. Circling back to Yahoo Video, I found the precursor that inspired that one. It made me just as misty. Enjoy it!

See also, The Birth of a Movement

My blog title, Hug the Monkey, is a metaphor about how we need to give and get cuddling and hugs to grow and stay healthy and happy.

But the Touch Ambassador points to a story from last month's Nature magazine about how Mexican spider monkeys use hugging as a way to defuse intra-clan tension. (I think she is part of the Cuddle Party crew in the UK.)

The small gangs bumps into one another frequently. If the other monkeys are seen as rivals, there is a danger that fighting will erupt. Hugging seems to be a way to ease the tension — aggressive encounters such as chases are more likely to happen among monkeys that do not embrace first.

This hugging presumably releases oxytocin, which calms the amygdala. The amygdala is a control center for the fight-or-flight reflexes; it sometimes causes animals (including the human variety) to lash out before the prefrontal cortex can make a judgment about whether aggression is called for.

Oxytocin also is involved in social memory -- recognizing who is a friend or member of the social group. So this hugging likely reinforces the "friend" relationship between huggers.

By the way, I went to a Cuddle Party in the San Francisco Bay Area, and thoroughly enjoyed it. I think they're dying out in the U.S., but here's my report: How I Cuddled

The Birth of a Movement?

Pets provide a real alternative to children, according to this article by Diane Crabtree in Halifax Today. She writes that many people turn to animals for love, either because they're not ready to have children or because they don't plan to have kids at all.

Crabtree reported on a survey of people in the UK that found 600,000 women own pets specifically as a child substitute. (That number seems awfully high to me, but I'm sure it's a big trend.)

Petting, cuddling or interacting with a furry pet releases the same happy neurochemicals that canoodling with another person does. For a report on a study that measured the release of oxytocin in humans and dogs as they interacted, see "My Dog Really Loves Me."

According to the article,

But prefering pets doesn't mean your life need be a child-free zone forever. Doorbar says the myth that "you either like pets or you like children" is usually misguided.

"It's kind of like love is rationed and if you give love to an animal then you haven't got any left for people - and that's just a load of old rubbish really," [psychologist Patricia Doorbar] says. "You find that people who love animals tend to love children, tend to care about other people. It kind of spreads - it's a habit."

So is being a good pet owner a good indication of future parenting skills? "Yes, it probably is. They're still very much the same," Doorbar agrees.

That sounds like a cover line from a woman's magazine, doesn't it?

But no sooner did Angie ask, "What are the natural ways to boost oxytocin?" than this article appeared in The Mirror. It includes one of the most reliable (although admittedly not the easiest) ways to get an oxytocin fix. In "15 Instant Energy Boosters," Michele O'Connor writes:

"An orgasm releases oxytocin, a hormone that increases mental clarity and energy - for up to 12 hours," says Jacob Teitelbaum, author of "From Fatigued To Fantastic" (Avery publishing, £7.59). And in a 10-year study of 900 British men, those who had sex most often had the best physical health and overall energy reserves."

(Because oxytocin promotes rest and healing, that's not surprising.)

Hug: You can hug anyone, really. Hold that clinch for at least 20 seconds. Just relax into it. Ahhh.

Hug your friend: Female bonding is likely promoted by oxytocin, according to Shelley Taylor, author of "The Tending Instinct."

Hug your dog: Or pet her, or nuzzle her, or whatever you two do together. (See My Dog Really Loves Me.)

Get a massage: Opt for a soothing one, not a "deep tissue release" session. Gentle touch stimulates the release of oxytocin.

Eat comfort food: As fat is digested, the intestine secretes CCK, a hormone that stimulates the vagus nerve. The vagus nerve sends s message to the hypothalamus, which shoots down some oxytocin. The gut has as many oxytocin receptors as the brain. (Just don’t overdo this. Tofu or yogurt will work as well as ice cream.)