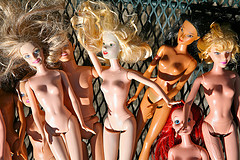 No, but not all of its effects turn you into an angel of bliss.

Science bloggers had a blast a few weeks ago, caviling at Paul Zak's Moral Molecule thesis, digging up an old study showing that soldiers defending their own troops had elevated levels of oxytocin.

First, men in the study were divided into two groups. Half the study participants inhaled oxytocin and half placebo. Then, they were shown photographs and asked to rate the people's attractiveness. While they were doing the ratings, they were also shown the ratings given by both their group and the other group (in-group and out-group).

Adjusting for various things, those who had inhaled oxytocin were more likely to conform to the ratings of their own group.

This is not surprising; we humans are social animals. In primitive times, physical survival depended on cooperation and mutual support of the tribe or extended family. Today, while we can maintain a single household and make a living without deep ties, we become physically stressed without affection.

Oxytocin helps us remember who we know and trust. It creates a bond deep enough for two parents to stay together despite toothpaste in the sink, angry words and the sheer drudgery of raising kids. And that deep bond lets mothers and fathers hold their children through the tears, dirty diapers and teen-age years.

So, evidently, it also helps us get along by going along sometimes.

Interestingly, the study was led by Mirre Stallen, who is with the Rotterdam School of Management, Erasmus University Rotterdam. (Zak also comes from the business world.) Business, commerce, industry, etc. are all based on cooperation and collaboration. Sometimes in the workplace, you can't be the squeaky wheel. So, a little oxytocin helps with that.

Lindsay Abrams of The Atlantic has an excellent write-up of the experiment with more detail.

Oxytocin Not Always So Goody-Goody