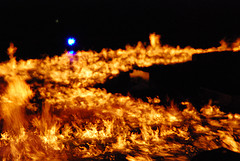 The New York Times published a fascinating article about research monitoring the heart rates of villagers in San Pedro Manrique, Spain, as they watch the annual ritual of firewalking.

Each year, on June 25, they celebrate the summer solstice by walking barefoot across a 25-foot-long bed of burning embers, each carrying a relative or friend on the back. The researchers wanted to compare the heart rates of the firewalkers to those of spectators, hoping to uncover the physiological basis of community feeling. According to the article,

... Said Michael Richardson, an assistant professor of psychology at the University of Cincinnati, "It shows that being connected to someone is not just in the mind. There are these fundamental physiological behavioral moments that are occurring continuously with other people that we're not aware of."

Although we may not normally be aware of this connection, it's well-known as the state of limbic resonance. In limbic resonance, the bodies of two or more people harmonize: the breathing rate becomes similar, heart rates synch, physical postures and gestures may match. Because breath and heart rate are controlled by chemicals in the bloodstream and brain, it's also likely that people in resonance also synch up biochemically.

Limbic resonance is best known between mother and baby. In fact, a newborn's nervous system is not capable of regulating itself. A baby needs to be near a grown-up body in order to settle and soothe. This is why infants deprived of physical contact fail to thrive. The mother or primary caregiver actually guides the baby's nervous system as it tunes in to the mother's. This drive to synch with another person's nervous system remains with us throughout our lives.

Orgasmic meditation derives much of its power and pleasure from the state of limbic resonance. OM is an opportunity to experience another person's body and to sink into that state of physical unity in a direct and conscious way. In a larger OM circle, everyone in the room can come into resonance, even if they are not OMing.

And, of course, orgasm is a reliable way to get oxytocin flowing through the bloodstream, where it triggers the relaxation response, improves healing, reduces pain and anxiety and generally tunes the body up. Sex seems to be "designed" to not only bring us closer but to make us healthier.

In addition to all the interesting things oxytocin does to our brains, it also seems to be involved in helping us feel satiated after we eat.

When fat from food reaches the stomach, the stomach releases CCK, a hormone that travels up the vagus nerve to the brain, triggering a release of oxytocin. Oxytocin travels back down the vagus nerve and causes the smooth muscles of the stomach to contract, leading to that full feeling.

A new study found that oxytocin could treat some of the symptoms of Prader-Willi Syndrome, a rare genetic disorder that includes symptoms of social deficit similar to autism as well as constant hunger.

For a long time, I've believed that the same oxytocin release that makes the stomach contract also activates the social centers of the brain, explaining that deep connection between food and love -- and why we use eating, especially eating things like ice cream, to heal heartbreak or loneliness.

It also decreased how much they ate, according to Science.

This is excellent news for people with this syndrome. Before you go online to try to buy oxytocin to lose weight, remember that people with Prader-Willi have abnormalities in the production of oxytocin. You can get the same benefits from oxytocin-producing activities like cuddling, calling your mom (if you are close to her) or a moderate amount of vanilla fudge.

Sarah Elizabeth Malinak of Creating Ideal Relationships wrote an interesting post about how healthy attachment to and identification with our same-sex parents early in life help us approach grown-up love relationships in a healthier, more satisfying way.

Her book, Getting Back to Love, co-written with her husband Joseph, focuses on what they call the mama's boy/daddy's girl dynamic, in which a child feels he or she has to work hard to win daddy's or mommy's approval. When they grow up, daddy's girls may be overly flirtatious or seductive; or, she may constantly look for men she can take care of.

A mama's boydidn't get the opportunity to shift from his mother's sphere of influence into his father's, nor to develop a firm male identity. He may be irresponsible, a pleaser, or angry at women.

In her blog post, she writes about the book  For Seven Lifetimes: An East-West Journey to a Spiritually Fulfilling and Sustainable Marriage by Vatsala Sperling and Ehud Sperling [Inner Traditions, 2011]. It's the story of an arranged marriage between and Indian woman (Vatsala) and an American man (Ehud).

... there was a revealing moment when Vatsala needed Ehud to come to her rescue. She handled the situation by clearly stating her desire that he help. She didn’t cajole or manipulate. ... In return, Ehud simply acted and came to her aid. He did not resist her or judge her. She needed his help, he could freely give it, he acted, and they both came out stronger for it.

Do read the whole post for a very interesting analysis of how early mothering and fathering affects our grownup love.