The National Institutes of Mental Health Strategic Plan for ASD Research is ready for public comment, two years after congress re-established the the Interagency Coordinating Committee (IACC) and required that the IACC develop and annually update a strategic plan for ASD research.

You can read the draft of the strategic plan yourself. It includes  not only treatment options, but also important issues such as estate planning, so that an adult on the spectrum who can't function independently can be sure of  getting the care and support he or she needs.

The plan has a pretty succinct summary of treatment options, and it does mention oxytocin as something that needs further study.  Here's  the entirety:

Medications to improve some of the symptoms associated with autism have been studied. However, thus far, no medication has been shown in controlled trials to enhance social behavior or communication. In 2006, risperidone became the first Food and Drug Administration (FDA)-approved pharmacologic therapy for certain symptoms of autism.
August 15, 2008 Draft for Public Comment.
Budgetary requirements not included pending IACC discussion in November 2008. - 17 -
First introduced in 1993 as medication used to treat symptoms of schizophrenia, risperidone has now been shown to be effective as a treatment of irritability and aggression seen in some children with ASD. Selective serotonin reuptake inhibitors have had mixed results in decreasing certain repetitive and stereotyped behaviors (Kolevzon et al., 2006). Other biological and pharmacological treatments that have been investigated in small studies and may warrant fuller attention include omega-3 fatty acids, memantine, oxytocin, and pioglitazone (Ammiger et al., 2007; Chez et al., 2007; Hollander et al., 2007; Boris et al., 2007)

Short-term research goals mentioned include testing widely used treatments that haven't been studied in a controlled way; conducting five trials of interventions for infants and toddlers by  2011; and  three randomized studies of treatments for  school-aged kids by 2012.

I wonder if Eric Hollander and his team at Mt. Sinai Hospital, the group that showed improvements in communication in adults after treatment with oxytocin, will be able to nab a grant under this program.

The Relaxation Response, Your Genes and Oxytocin

New research shows that activities like meditation or prayer that produce a relaxation response in the body actually change the function of our genes.

Herbert Benson and his team looked at long-term practitioners of deep breathing, meditation and prayer, and compared the patterns of gene expression among the individuals. Next, the control group spent eight weeks in one of the practices, and then the researchers compared the before and after gene expression.

Both phases of the study indicated that the relaxation response alters the expression of genes involved with processes such as inflammation, programmed cell death and how the body handles free radicals.

Science now knows that genes are not static. Their activity can be suppressed or enhanced, and they can be "turned on" or "turned off" by other physiological states, as well as events external to the body.

Kerstin Uvnas Moberg, the Swedish researcher who first identified oxytocin's calming effects, calls it the "calm and connection" response. Although Benson doesn't mention oxytocin, I believe that oxytocin is the ruling hormone and neurotransmitter in the relaxation response. If this research had looked at oxytocin receptors and oxytocin-producing neurons, I bet they would have seen "up-regulation," that is, increased functioning.

From the article in Science Daily:

"For hundreds of years Western medicine has looked at mind and body as totally separate entities, to the point where saying something 'is all in your head' implied that it was imaginary," says Herbert Benson, MD, director emeritus of the Benson-Henry Institute and co-senior author of the PloS One report. "Now we've found how changing the activity of the mind can alter the way basic genetic instructions are implemented."

To my mind, this is further proof that we can build or heal the oxytocin response naturally, without snorting anything. 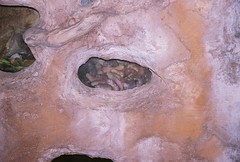 The naked mole rat, Heterocephalus glaber, not only looks weird, it has a very unusual lifestyle. Mole rats live in colonies organized like ant or bee colonies, with a queen, workers and a few breeding males.

Lisa Conti of Today in Mice, a very interesting blog published by Miller McCune, reports on research by Nancy Forger of the University of Mass.

Forger thinks oxytocin may be the bonding force in these underground societies.

Journaling Can Provoke an Oxytocin Response

The top question among most of us who are interested in oxytocin is, "How can I get more of it?" I always try to promote natural ways to get an oxytocin rush, instead of buying probably-useless products over the internet.

A new study, published last month and reported by Science Daily, points to still another way: writing about your values and core beliefs.

Jennifer Crocker and Yu Niiya from the University of Michigan and Dominik Mischkowski from the University of Konstanz in Germany, followed up on a different study that showed coffee drinkers were more open to hearing information about why it's bad for you if they had first written about their most important value. Crocker and Niiya wanted to understand what caused this effect.

In the second experiment, smokers and non-smokers did the same writing exercise, and then they read an article about the harm of smoking to your health. The people who had written about an important value felt more loving and they were also less defensive about the negative info on smoking.

They didn't test the subjects' blood, but the researchers think that oxytocin is what made the difference. According to the article,

The researchers speculate that the love and connection people feel after writing about important values could affect hormones related to care giving, such as oxytocin. Because oxytocin increases trust, it might account for reduced defensiveness in people who take a few minutes to reflect on their important values.

James Pennebaker has shown that writing about things that bother you can boost your immune system's functioning. A release of oxytocin also could explain that effect.

A pamphlet designed to give young women information about sex includes a discussion of how oxytocin's bonding effects can have unforeseen consequences, according to LifeSiteNews.

Miriam Grossman, a psychiatrist at UCLA, got attention, not all of it positive, for her recent bookUnprotected: A Campus Psychiatrist Reveals How Political Correctness Endangers Every Student. While she was criticized for being anti-sex or promoting double standards, I think it's crucial that men and women both understand the neurochemical differences between the sexes when they have sex.

It discusses in familiar words the effects of oxytocin, a hormone released by intimate behavior, on one's ability to make clear choices and on the long term consequences of the choices one makes: "Because of it [oxytocin], you could develop feelings for a guy whose last intention is to bond with you. You might think of him all day, but he can't remember your name."

This certainly happened to me, over and over. It was intensely painful and damaging. And I don't think this pain and loss should be seen as just a natural part of growing up and dating.

A survey of centenarians -- people who are 100 years old -- found they credited strong social connections, not genetics, with their longevity.

The survey by Evercare, which, I think, is a service that coordinates health care for the elderly, found that in addition to staying in touch with people in their communities, some of these long-living folks also use the internet to connect.

Centenarians say staying close to friends and family is most important to healthy aging (90 percent). Keeping the mind active (90 percent) and laughing and having a sense of humor (88 percent) also ranked high for living longer.

When we engage with others, even via electronic means, the oxytocin response tunes the immune system, promoting relaxation and healing while lowering blood pressure and reducing the stress response. Sociologists and healthcare providers have long known that married people -- especially married men -- live longer and healthier. But you don't need to be married, you just need to have people you can connect with regularly.

Posted at 07:06 AM in Attachment, everyday oxytocin | Permalink | Comments (0)

Are Women More Likely to Forgive (and Forget)?

Still another fascinating human oxytocin study was published last week. Adam Guastella, from the Brain & Mind Research Institute, University of Sydney, gave 69 men a whiff of oxytocin and then showed them photos of faces. Some of the faces were happy, some neutral, some angry.

The next day, they showed the men some of the same photos mixed with new ones -- sans oxytocin. They asked them which ones they remembered; the men who had inhaled oxytocin were more likely to remember the smiling faces.

Adam Guastella also is doing a trial using oxytocin during couples psychotherapy, to see if it makes the couples more open and connected, thereby increasing the progress they make. Beate Ditzen did an experiment a couple of years ago in which couples snorted oxytocin and then engaged in an argument. Those who got oxytocin were better able to resolve the dispute with less anger.

At LiveScience.com, Meredith Small reports on the study in a post with the provocative title, How Birth Control Lets Us Down. Her premise is that because lactating seems to be the state in which we release the most oxytocin, when women don't have children or have fewer of them, we're missing out on the positive emotional benefits:

...the oxytocin universe has altered for many women. In Western culture today, women barely lactate at all, leaving them just as physiologically ready to hold a grudge, to never forget the face that did them wrong, as any man.

Too bad. Perhaps what we need is more lactation, by men and women, or a daily shot of oxytocin to help us all put on a happy face.

Of course, oxytocin is released in response to all sorts of social interactions. And, while estrogen seems to enhance its effects, making women more open to bonding or to forgetting those angry faces, men certainly fall under its influence as well.

Small makes another interesting and very important point, though: In situations or cultures where women do tend to be the ones to center the family and maintain social connections, this skill is not always valued:

Problem is, those good social skills, that penchant to forget the faces of those who are angry or neutral, has not always helped women. Instead, men, who are never awash in oxytocin and who apparently never forget an angry face, usually see women as emotional Pollyannas, silly creatures always ready to forgive and forget.

Of course, she is engaging is some stereotyping. Women certainly hold grudges, sometimes better than men, perhaps because a breach of the social bond is more devastating. And men are certainly awash in oxytocin, although their neurochemistries can make its effects less obvious.

Posted at 08:05 AM in everyday oxytocin, mothering, Oxytocin | Permalink | Comments (5)